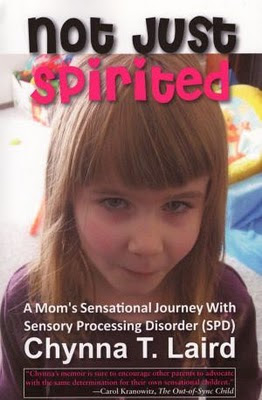 The book is firstly a memoir of Chynna's daughter, Jaimie's first six years. It covers her struggle to have her Sensory Processing Disorder (SPD) recognised and accomodated. The book is also, at times, a text book on the SPD and related therapies. It provides a comprehensive list of therapies which can be applied as well as describing the condition in detail.
If you have a child with SPD, then there's no question that this is the book for you.
More importantly though, if you have a "special" child; a child with special needs, a child on the spectrum or simply a child who you feel, in your gut, is somehow different, then this book is an essential read.
So much of Chynna's story was familiar to me;
The difficulty getting doctors to even accept that your child is different, the pressure on the relationship, unsolicited disciplinary advice, the lure of medications and the army of pediatricians, psychologists, psychiatrists and teacher's aides - each with their own particular strategy.
One thing that impressed me with the book and with Chynna herself was the extraordinary breadth of her researches. She truly left no stone unturned and her thoughts both positive and negative on the various forms of therapy, diets and techniques are insightful and encouraging.
It was Chynna's husband, Steve's chapter which moved me to tears. As a father I appreciate the difficulties of bonding within an environment restricted by work and other commitments. To put so much of himself out there with so little hope of reward is the sign of a true hero.
Then there's a chapter which deals with Chynna's attempt to put herself in her daughter's shoes. It was heartbreaking to realise exactly what Jaimie goes through every waking moment of her day. Chynna's coming to terms with her daughter's world was certainly a key step in moving forward. It's a step that I wish more parents had the courage to make.
In the end, despite a variety of techniques the book leaves no doubt that the "answers" are once again to be found in acceptance rather than in change. It's a message that everyone working with special needs children (parents, teachers and doctors) must take onboard if their therapy is going to succeed. Special needs children do need to have their boundaries extended constantly. Pervasive therapy however isn't the only option.
There are also couple of amazing examples in the book where we see that the actions of other children socialising or playing are actually more effective than therapy. I won't spoil these - you need to read them for yourself. They're amonsgst my favourite passages though and I re-read them several times. In a world full of stories about bullying, it's so encouraging to see that children can also be so supportive and caring.
Not Just Spirited is a book for everyone involved with special needs children and I urge you all to go out and get a copy.
Other Notes and Links
There's also a really interesting post by Chynna on mom-blog called;
Five things no one ever told you about ... SPD
Link to the Amazon Page
http://www.amazon.com/Not-Just-Spirited-Sensational-Processing/dp/1615990089
For Australian Readers: A Link to Chynna's books at Borders.
http://www.borders.com.au/by/chynna-t-laird/1243502/
Honesty Clause
I was sent this book for review at no charge. I'm trying not to be biased but I guess it's possible.

Hartley said…
What a great review!

I have read Chynna's book, and I too was moved to tears by Steve's chapter (You are right: he is a hero!) and those 'moments' you speak of moved me to tears too. :) It is all I can do NOT to start a conversation about one in particular, but I don't want to ruin it either!

Chynna said…
Gavin, I was moved to tears by your review. Thank you so very much.

The chapter about Steve was very difficult to write. How does one write about one's child rejecting him? It was excrutiating.

But he and Jaimie are trying every day to reach a 'happy medium' and that's wonderful to watch.

Thank you so very much for this review, Gavin.