Book Review: "A Lifetime of Laughing and Loving with Autism" Compiled by R. Wayne Gilpin 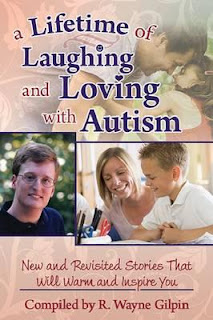 A Lifetime of Laughing and Loving with Autism
New and Revised Stories that will warm and inspire you.
Compiled by R. Wayne Gilpin

It's hard to describe the gap that this book fills but it's a significant one. I've heard it described as "chicken soup for the soul for parents of children with autism".  It's not a turn of phrase that I'd normally use, but I guess it's quite accurate.

This book was one of the first positive texts published at a time when the world of autism was overwhelmingly negative. The world has changed a lot since then but I've still not seen a book which tells autism stories quite like this.

The book reads very much like certain sections of a women's magazine. In Australia, the magazine column is called "mere male" and it's full of stories about partners, family and children who misinterpret things with amusing or revealing results. This book is more of the same but this time with people on the autism spectrum.

Just like those "mere male" columns, there's no malice intended and clearly the individuals talked about are very much loved. Instead of malice, this book says "I can relate" or "that happened to us too!".  In some cases it makes it very clear that we underestimate our children with autism or the love that their siblings have for them.

In short; this is a book full of "magic moments".

There are funny stories, sad stories, shocking stories and best of all, poignant stories. There are amazing stories of things that good and bad teachers have said and done and emails from people on the spectrum which capture important moments and feelings.

Best of all, this is a book of hope filled with moments that you'll treasure and re-read over and over again.

Each story is very short, with most being only a paragraph or two. This means that it contains a large number of stories and that it's very accessible and easy to read.

A Lifetime of Laughing and Loving with Autism is available from Future Horizons - in fact it's the book which changed a father's life and opened the doors to the largest publisher of autism-related books in the world.

It's also available from Amazon.

With Christmas just around the corner, this is one of those books that would make an excellent gift for a family with a child with autism. A gift that simply says, "I understand".

This review was based on the 2012 edition and on materials provided to me free of charge for review purposes.