December 31, 2013
One of the things that my wife and I do is watch "expired" TV shows. We're not really fans of the "hanging on week-to-week" problem that accompanies regular TV. Game of Thrones, Walking Dead, Doctor Who and Big Bang Theory are exceptions but even then we sometimes don't watch anything until after the season has ended.  Our series at the moment is a Canadian TV show called Being Erica which ran from 2009 to 2011.  It's sort of like Bridget Jones with  a therapist and time travel (and sadly, a bit less humour). 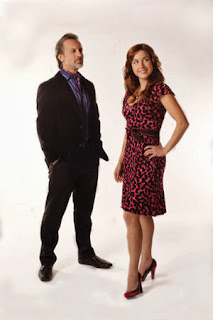 The lead character is sometimes likeable and sometimes unlikeable and she tends to make choices which more often than not, land her in one predicament or another.  In the episode we watched last night, (hopefully not a bad spoiler) she decided, after being fired from her job, to start a new company on her own.  Her boyfriend who is a rather more cautious fellow tried to talk her out of it because he felt it was too risky. She agreed, then changed her mind, then decided that her relationship was not working because every time she tried to go "outside the box" her boyfriend would push her back in.

It was really interesting that my wife, as usual came down on the girl's side and the idea that her creativity was being "repressed" by her boyfriend.  I, on the other hand agreed that it was a very risky move and felt that if things went wrong, she could end up seriously impacting the quality of life of both of them. I also felt that she was disrespecting the relationship by wanting to break up during the first disagreement - not to mention that at some point, she'd already cheated on the guy.

Jumping Back into Real Life
Now I know this is only a TV show but like all good shows, it has strong parallels in life. I've always been a very cautious person, with the shortest time I've stayed in a job since university being eight years. I've frequently been approached about contracting work but although there are many benefits and I have no doubt about my working abilities, I've always stayed with full time work. I'm risk adverse. My wife has often accused me of this and when we finished building our new house, she said, quite correctly, "if it had been left up to you, we'd still be living in the old house and you wouldn't have changed a thing".

Even when we've been budgeting, my wife will want to factor in a tax cheque or a work bonus or some other non-specific option but I'll always say, "that's not certain, we're only budgeting with things that we KNOW we will have".  There have been times where I've been stressed out or pushed too hard at work (or marriage) and I've felt like leaving but my risk adverse nature always compels me to apologise, compromise and patch things up. Clearly my dedication to "playing it safe" has kept us in a reasonably good position all these years. I think it has made me a better person too.

The question is, does it keep us in our "box"? Does it represent a restriction of our dreams?

I suspect that it does to a certain extent and I suppose that I have to be grateful that I have my wife behind me prodding me to try different things instead of just taking the safe route.

When we first got married, I didn't eat rice, sultanas, carrots, broccoli, pumpkin or sweet potato.  Now I love rice (still hate the other stuff). The aforementioned house wouldn't have been built without her getting behind it and even smaller risks, like changing jobs probably wouldn't have occurred without her nagging (erm, I mean, prodding).

It's something that gets my wife riled up about my mother. My mother nags constantly about things that need to be done. What my wife doesn't realise is that this goes with the territory of raising an aspie child and as my own children grow up, I see this behaviour repeated because only with "nagging" can the proper changes and risks get attention. My mother nags me about things because she knows that without the nagging, I'll forget or even worse, simply "let it slide".  I've often said to my wife that I while I don't like the nagging, I do appreciate it. I'm not sure that she understands this yet but in years to come, I think she will.

This is the way it is with Aspie kids and partners. We like to play it safe but we also need a gentle push to get us to try new things or simply to get things done. Sometimes a gentle push isn't enough. Sometimes we need to be reminded over and over again - and sometimes, though we hate it, we need a hard shove off the edge of the precipice.

We're often risk adverse or as the books say, "change resistant", but it doesn't mean that we can't accept change. Give us enough acceptance and support, make sure that too much doesn't change at once and make sure that we have something solid to cling to and we'll make the change... Eventually.

Angel The Alien said…
This describes me pretty well! I know I miss out on some great experiences because I don't want things to change. Part of this is because I like to be able to know what is going to happen, and to picture which day will bring. For instance, right now while staying with my parents, I am seriously contemplating moving across the country to live near my brother and other family members... but at the same time, I really LIKE the routine I have here, and I like knowing what I will be doing at any given moment. Changes freak me out.
December 31, 2013 at 2:30 PM

Alana said…
Yes. Boyfriend reminds me to go out and do things and explore and be more exciting and try new things. I make sure we don't do anything super-crazy-unsafe.
December 31, 2013 at 4:45 PM

Marita said…
I hear you on the nagging, although as the person who has to always do the nagging; it is exhausting.

I know how hard it is for my girls and husband to change their routine and try new things, so I try not to let it get me down. For them the change is as exhausting as I find the nagging and pushing.

As for movies, I'm totally with you on watching a whole series in one go. I find that is the most enjoyable way. Having to wait and wait and wait (Doctor Who and Downton Abby) is hard and I don't do suspense well.
January 2, 2014 at 12:16 PM

Anonymous said…
My daughter seems to go ok with the 'big' changes like holidays, moving house, etc, its the smaller day to day changes that freak her out- ie, different brand of milk- its hard on the rest of the family, we cant predict the changes that are going to cause her upset
January 5, 2014 at 5:37 PM

Pam said…
It's good you appreciate the nagging. I wonder if you do anything for her that requires the same effort from you.