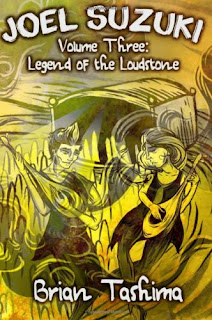 Joel Suzuki Volume 3: Legend of the Loudstone
by Brian Tashima

In recent years, it has become more common to add characters with autism to mainstream stories. It's partially about inclusion but it's also the fact that people on the spectrum tend to make more interesting characters.

The Spectraland saga is a young adult series that has been based, from the very beginning, around two characters; Joel and Felicity both of whom are on the autism spectrum.

Spectraland is about two young adults from Earth who find themselves in a fantasy world where their music translates to magic. You can read my reviews of books one and two here. If you haven't read the first two books, in the series, you really need to read them first.

The third book in the series moves away from Spectraland to an adjoining region, the "mono realm" where conformity is a way of life and a rebellion is brewing.

It's interesting to note that while the first two books in the series felt very "fantasy" this one feels like it has a dash of sci-fi and at times, it has a similar feel to the last Hunger Games book.

With this book, author Brian Tashima has renamed the series to "Joel Suzuki". It's a good change and one that feels more consistent, and is much easier to say.

Brian has big plans for the Joel Suzuki series and there's a great interview with him on the spectrums magazine website. There's now a fan club with access to special materials and Brian's Joel Suzuki site at www.joelsuzuki.com is also well worth a visit.

The books are full of great “young adult” moments and as the story progresses, you are privy to Joel’s thoughts on relationships and his interpretation (and misinterpretations) of the behaviour of characters around him. 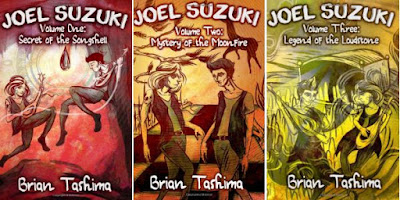 As usual, Joel and Felicity’s differences are "Front and Centre" but without other "humans" in the story to compare with, they're absolutely "normal".  Their differences are very much a part of their characters rather than being traits that are constantly being discussed. The story moves around, clearly influenced by their perspectives and gifts.

The Joel Suzuki series is a great young adult series and well worth a read.

You can get these books at Amazon in Kindle and Paper format.


Honesty clause: I was provided with a free electronic copy of Joel Suzuki Volume 3: Legend of the Loudstone for review purposes.

Anonymous said…
"also the fact that people on the spectrum tend to make more interesting characters."

As if people who aren't some kind of autistic are *less* interesting?

Obviously having a harder time learning social skills doesn't make one *worse*, but before you add to the hype saying it makes one *better*, read this:

"the message I got sold and latched onto tight with both hands (partly because I got told this by most of the adults in my life and partly because I wanted so badly to believe it) was that 'oh, it's fine, you're smarter than they are, and they're just immature jealous bullies, you'll see, it'll all work out once you get older.' So, rather than actually give me any motivation to figure out my own shit, all I got was a bunch of validation that it was just fine to continue being an asshole to my peers. And yeah, you reap what you sow."