Star Wars Identities -- and how Children with Asperger's are more than meets the Eye. 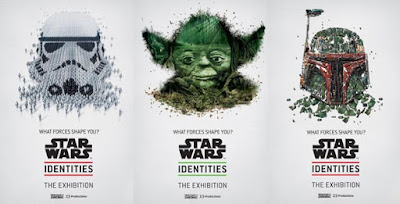 A few weeks ago, my boys and I visited a Star Wars exhibition in the millennium dome, London. It was called Star Wars Identities and it was very interactive and thought provoking -- and it made me think about Aspergers Syndrome.

Essentially the exhibit followed the similar but wildly divergent paths taken by the characters of Luke and Anakin Skywalker while giving us "nerds" a chance to look at memorabilia. 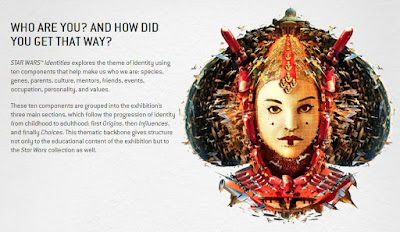 There were a bunch of stations, about a dozen in all, where clips from the films were used to explain internal and external influences and participants were asked to make their own choices by voting with some special wristwear.  The result was that at the end of the exhibition, you would have created your own unique “Star Wars Identity”. It was all very educational.

As usual in these situations, my mind turned to thoughts on Asperger’s and how it related to what we were being shown.

Asperger’s is only a small part of your “self”.

One of the key points of the exhibition was that there are many factors at play in the way our lives turn out.

Autism is very much a genetic factor but even “identical” twins will grow up differently depending upon other factors. The exhibition covered the following factors, not all of which apply to humanity; species, genes, parents, culture, mentors, friends, events, occupation, personality, and values.

In the Star Wars universe, mentors such as Qui Gon Jinn, Obi Wan Kenobi, Chancellor Palpatine and Yoda all play a significant role.  This is true of people with Asperger’s too. Mentors appear at all stages of life and can be relatives, teachers, friends and work colleagues. Mentors generally step outside the boundaries of normal relationships and bring a lot of special social advice to situations. The relationship between the mentor and the “student” isn't always smooth but while disagreements may be common, mutual respect generally prevails.

Friends are also important when it comes to our kids with Aspergers. Too often, as parents, we don't even know if our children have "friends" and in fact, quite often our children don't know either. Instead of asking "who are your friends?" or "who did you play with at lunch time?", you're better off asking your children "what did you do at lunch time and who else was there?"  When the same names start cropping up over and over again, you know they're likely to be friends.

Upbringing also shapes the development of people with Asperger’s syndrome. In the Star Wars exhibition, they contrasted the parenting styles experienced by Luke and Anakin. Luke was very much “under the thumb” of his aunt and uncle and was restricted in his personal pursuits in favour of his chores, Anakin, despite being a slave, was given free reign  - even to the point of being able to choose to separate from his mother at an early age. I'm not suggesting that if you give your children freedom, they'll become "sith lords",  simply that different parenting styles have a major effect on the way your child behaves as they enter adulthood.

My children go to a Catholic school but this isn't because we're huge fans of religion. It's because we feel that that the values promoted by the Catholic school systems in Australia are more consistent with the values that we, as their parents will share. I often say also that I want my kids to know how to live within (and fight from within) an oppressive system -- that's no joke.

I'm always encouraging my kids to question the values they are taught at school. A good example of this is the recent gay marriage debate in Australia -- but that's a story for another time.

It wouldn't be Star Wars without a discussion of the basic crisis endured by the characters. The main point here is that we are in part shaped by the things we endure. The big things, such as sudden deaths in the family are recognised as PTSD today but the smaller crises play a part too.

I know that children on the spectrum who experience a loss of toys, for example due to theft or natural disasters, will often develop a neurosis about sharing or toy-protection.

Each of our kids is born with a different personality. I strongly believe that there is some unknown, possibly genetic, factor at work here because if there wasn't, my two boys would have more or less identical personalities. Instead they're "chalk and cheese".

Why is this Important?

I personally felt that the Star Wars identities exhibition taught my kids a lot about who they are and why they make the choices they make. It was a lot of fun, which more or less guarantees that they paid attention but at the same time, I felt that it helped them to understand that "Asperger's does not define them". Lots of different things combine to define them.

btw: both my boys choose ewoks as their species but my eldest turned to the dark side. 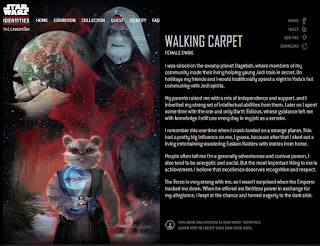 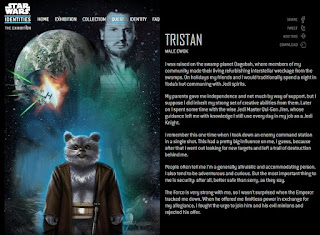 Aspie girl said…
Parenting sure can shape an aspie child's personality (and an nt). My parents used to be angry at me for being different, so I was ashamed of my aspie traits. They used to put a huge amount of pressure on me to make friends, up to a point that I didn't have a choice. As a result, I've looked at friendship and socializing as an unpleasant duty. I don't have any friends and don't feel comfortable around people.

Religious schools (of any religion, I think) have much less violent and bullying, and the kids seem to be more well-behaved. Kids imitate each other, so sending a kid to a religious school can teach him desirable behavior patterns.
December 17, 2017 at 6:01 PM

I'm sure by now you realize your parents didn't mean any harm, they just didn't really understand you.

My siblings and I lived through something very similar but, my brother was the one who suffered the most. My father picked on him and was a dad-bully (yes parents can be bullies too, its how kids learn to bully most of the time - so sad!) Not wanting him to grow up as a failure, he steered him right into becoming an alcoholic. Today both my father and brother are still fighting this battle but, my brother has chosen to change him life and dedicate him self to helping other males in similar situations. He understand my father now and has tried to help him. He aims and hopes to help and enlighten
other father's and son's views of each other so that they don't have to experience the agony and disappointment that he and my father suffered.


A relationship between a child and parent should ALWAYS be one of love, understanding and acceptance. If a child can not feel safe coming back to his/her parents for reassurance they will go somewhere else.....