Mansplaining and other Conversation Breakers 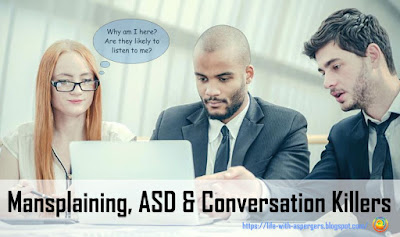 Of all of the bad things that men do to women, Mansplaining is the one that terrifies me the most on a personal level. This is because I believe that I'm essentially a good person and I'm in control of myself. I know that I can easily avoid most mistakes but mansplaining is different.

It's not so simple to avoid and it is something that sneaks up on me. Sometimes I don't realise that I'm doing it until I'm right in the middle of a conversation -- and then I suddenly feel like I want to run away.

Mansplaining is certainly not "an autism spectrum thing" -- it's not even a "man-only" thing. I think however, that being on the spectrum may increase the likelihood of our conversations being interpreted as "mansplaining". I certainly don't mansplain for a "power trip". If and when I do it, it's  usually because I'm so poor at conversation and because I'm partially deaf.

Regardless of the reasons, I'm determined to make this a thing of the past...

Although the term is at least three years old, I only became acquainted with it earlier this year when I saw a comedy show doing a skit on it. (You can ask that: Mansplaining) If you do a YouTube search on the term, you'll find plenty of skits. Sometimes having a laugh about something is also the best way to learn something new. I feel that when you're laughing, you're open to new experiences and new understanding.

The videos on YouTube tend to show extreme examples of mansplaining in which there's no doubt that it's happening. It's important to realise however that standard and generally respectful conversations could still be perceived by others as mansplaining because it's not always our behaviour so much as the perception of our behaviour that is important.

There seems to be two major parts to mansplaining;

The worst part of mansplaining is that the person doing the explaining feels that their opinion deserves to be heard more than those being "explained to".  This may be because they feel that theirs is the only correct (or fully correct) answer or because they simply don't have enough respect for the other people in the conversation.

When it comes to interrupting, mansplaining often happens because one person in the conversation "shuts down" or talks over the other. Since male voices tend to be deeper and louder than female voices, it's obviously much easier for a man to do this to a woman than it is the other way around.

Is this a Sexist Term?

I'd love to be able to say that this is absolutely a sexist term and that being condescending and interrupting others in conversation with the aim of power-tripping or silencing unwanted voices is something that happens with both genders. Unfortunately, the term is what it is and it was coined because it's more commonly a male behaviour directed towards women.

That doesn't mean that women don't "mansplain" -- they do. It's just that usually when a women "mansplains" she's more likely to be doing it for reasons of power over an individual rather than "power over a gender".  The other thing of course is that from childhood, men are conditioned to have their voice heard more than women. Hopefully that's changing now...

In any case, regardless of who is doing it to who, it's not a good behaviour in any conversation.

These days, I don't feel like I'm condescending but I know for sure that in my youth I was. In my teenage years especially, when, like all teenagers, I felt that I knew everything, I would often explain things to my parents and girlfriend in a condescending way.

It's something I regret and also something that I'm now very careful to avoid. I don't talk down to people. I try to respect them for giving up their time to listen to me.

Sometimes it's not easy. Sometimes my head starts racing and I'm thinking further ahead or more deeply in a conversation than the person I'm talking to. People with autism do this a lot, especially when a conversation touches on one of their special interests. When that happens, you have only a couple of choices, try to re-explain your thoughts in a slower, simpler manner, or drop the conversation.

These days, I'll mentally ask myself whether or not someone needs to know what I'm telling them (to the level of detail I'm telling it in) and if I think they don't, I'll trail off and end the conversation. If they're truly interested, they'll ask for more detail -- they almost always don't.

This is by far my biggest problem. I find that I interrupt people for various reasons;


If there's any chance that your words will hurt. It's best not to say anything. We can all be better conversationalists but only if we think about others when we speak.

Anonymous said…
I am worried that you've fell into the feminist trap. I suggest you seek out women who are against feminism and instead support male and female rights. I hope you find the truth.
August 27, 2018 at 1:46 PM