Do we become more autistic as we get older?

It seems an odd question but it's one that crops up with alarming regularity on autism forums with older members.  It's also a loaded question because the literal answer is clearly, "No, there is no charge in the level of autism in us as we age.

The subjective answer however is quite different. 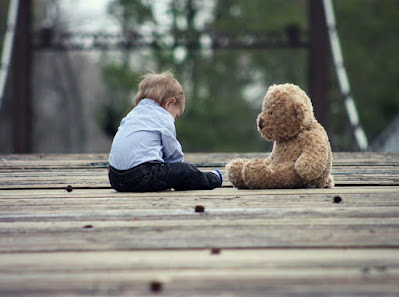 Image by Cheryl Holt from Pixabay

What does it mean?

When we ask whether we become more autistic,  what we're really trying to ask is whether our autistic traits become more pronounced over time. It's an interesting question.

The visibility of our autistic traits waxes and wanes throughout our lives based on personal and environmental circumstances.
To answer this, we need to take a look at how autistic traits manifest in different age groups.

When we start out in life,  the expectations on us are fairly simple.  We are expected to sleep, cry and drink milk. Any differences that we may have will usually have little effect on our ability to deliver in these areas. We're also primarily around inexperienced and young mothers who don't know how to interpret the differences in their child's behaviour compared to other children.

Sometimes observant parents will notice some differences but even if they are remarked upon, they usually don't get brought up in the right circles.
For the most part, autism in babies goes completely unnoticed.

As we get older and the expectations upon us increase, they begin to attract more attention,. Autistic toddlers are seen to be more aloof, to fail to make good eye contact or to hit all their  developmental milestones just a little too late.

The milestones in particular make developmental delays, including autism so much easier to detect and the sudden appearance of detectable signs at this age is one of the reasons why vaccination was once considered to be a cause.

The visibility of autism climbs from here with increasing activity, increasing demands and increasing measurement all leading to greater visibility.  Children start to have meltdowns as distinct from temper tantrums and they begin to more visibly communicate anxiety.  Children display other common signs, lining up their toys, speaking in monotone, developing focused special interests and showing fascination with the parts of objects.
When children reach school age they are handed over to experienced teachers who have seen many kinds of differences and who can easily compare one child to several of their peers. If autism hasn't been detected before school, it's certainly likely to be picked up there/
There are some very good reasons why you should listen when teachers tell you that your child is different.

It's probable that the visibility of autistic traits would continue increase gradually over time were it not for modern therapy which essentially seeks to "normalise" behaviour. I'll leave the debate on the merits of this approach for another time.
After diagnosis, children on the spectrum are taught how to adjust and disguise their symptoms to fit in. They're taught how to recognise a meltdown before it happens and how remove themselves from a potentially explosive situation. Extra attention is placed on getting them to develop social norms and various therapies are engaged, including speech therapy which encourages them to lose the monotone.

As children are "normalised", they learn to exhibit socially acceptable behaviour and to hide their differences from others. This form of repression can significantly reduce the visibility of autistic traits - and these learnings can last a lifetime though without constant reinforcement, they usually wear off eventually.

Getting back to the original question,  it seems clear that when individuals are diagnosed and are subjected to behaviour modification,  they "become less autistic as they get older" but only up to a certain point.

The turning point tends to be the point at which the behaviour modifications stop. This will vary from one person to the next as it depends upon their living situation. Young adults who live with their parents, and whose parents are actively shaping behaviour will probably remain "programmed for normality" for longer.

People who marry partners who correct and influence their behaviour will also suppress their traits for longer. This is also true of people who work in places where they're surrounded by staff who care for them.
Having a good support network seems to be a major factor in retaining "normal" traits.

People who are left to their own devices will revert back to familiar patterns more quickly because they don't have to "mask" for anyone.  This is particularly true of people who live alone.

Reversion is also common among people who understand their diagnosis and embrace it. In this case, people are making a conscious decision to unmask.

In these cases, people absolutely allow their autistic traits to become more visible.  The process of letting go is gradual as people who are unmasking need to feel comfortable and supported in order to grow.

It's very common for adults who are coming to terms with a diagnosis to read and talk about it on the internet. It's quite likely that for a group of autistic adults on an autism forum on the internet, autistic traits become more visible as they become more accepting and begin to "unmask".

There's one more factor behind age and unmasking.  I've noticed that quite a lot of older people seem to develop a sense of social entitlement with age. That is, they develop the attitude that they can "say whatever they want". It's not uncommon for people who have been normalised to relax their conditioning under these circumstances.

In that sense,  I guess that it's true. The older we get the more autistic we become.

October 29, 2009
One of the most frequent questions I'm asked is why an aspie (or suspected aspie) suddenly goes "cold" and backs off on an otherwise good relationship. It's a difficult question and the answers would vary considerably from one person to another and would depend greatly on the circumstances. Nevertheless, I'll try to point out some possibilities. Negative Reasons I generally like to stay positive on this blog and assume that people are not necessarily "evil" but simply misguided. Unfortunately, I do have to acknowledge that there are some people out there who take advantage of others. I read a book a few years ago on "sociopaths in the workplace" and I was stunned by the figures. They suggested that sociopaths were so common that most workplaces (small business) had at least one or two. The fact is that there are lots of people out there who really feel very little for others and who are very manipulative. I'd like to say that aspies are
62 comments
Read more

November 16, 2010
I apologise for the excessive "male-orientated" viewpoint in this post. I tried to keep it neutral but somehow, it just works better when explained from a male viewpoint. Here's a phrase that I've seen repeated throughout the comments on this blog on several occasions; "I know that he won't miss me when I'm gone because he's aspie" Today, we're going to (try to) bust that myth; Individuals I'll start off with a reminder that everyone is an individual. If all aspies were completely alike and predictible, they'd be a stereotype but they're not. Each is shaped by their background, their upbringing, their beliefs and their local customs. An aspie who grew up with loud abusive parents has a reasonable chance of becoming loud and abusive themselves because in some cases, that's all they know. That's how they think adults are supposed to behave. In other cases, aspies who grew up in those circumstances do a complete a
146 comments
Read more