Spoon Theory and how it Relates to Autism

I was part-way through writing my next blog post and I thought, I need to link this to "Spoon Theory".  I was pretty sure that I'd covered it here before, so I went searching. Turns out I haven't covered it at all, so here it is... spoon theory"

Spoon theory is a critical part of any discussion on autistic burnout but the term was originally coined by Christine Miserandino in 2003 as part of a discussion on lupus in her essay "The Spoon Theory."

It was used to explain how different people use different amounts of energy to do the same tasks. 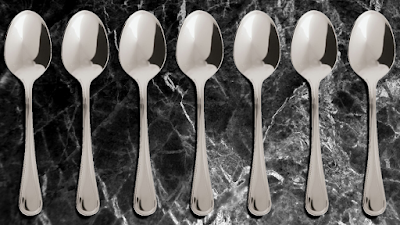 The idea of calling it spoon theory came about simply because the explanation was taking place in a diner and spoons were the easiest thing to get hold of at the time.

Suppose that everyone is given a set number of spoons and that these represent stamina/effort. As you complete tasks through your day, you will expend "spoons" until you run out. At which point, you have no choice but to rest until they are replenished.

For a person without disabilities, many tasks, such as making breakfast for oneself are so "low energy" as to not even consume a spoon. In fact, many people list cooking as one of the things they do for pleasure.

A person with disabilities would therefore use their spoons up much faster than a person who had no disabilities, meaning that the disabled person must exercise a lot more caution and must put a lot more effort into making sensible decisions.

For example, if they're on their last spoons, then going out might not be a good idea because they may run out of energy while out.

While spoon theory can be applied to all manner of disabilities, it was really designed as a way to explain the many "invisible"  disabilities, including autism.

Able-bodied people can usually understand how visible disabilities, such as people who need mobility support, people with strong sensory disabilities like blindness or profound deafness, and people with clear intellectual or genetic disabilities can find everyday life difficult.

It's much harder to explain to an able-bodied person how disabilities such as dyslexia, ADHD, higher-functioning types of autism, colour-blindness, partial blindness or deafness, chronic pain, depression and fatigue impact a person's daily life.

There are some things that (some) people with autism do very well. These are quite often related to their special interest. For example, my sons and I don't use any spoons when it comes to computer problems, even though these types of problems certainly cause frustrations for others.

It's important to note that being autistic does not mean that you're automatically good at math or computers. They just happen to line up with a special interest for me personally.

There are some areas where autistic people tend to struggle more than non-autistic people. For example, in anything involving other people, interpreting non-verbal languages and relaying standard expected empathetic responses in conversations.

Again, this doesn't mean that all autistic people are bad at these things, some are just naturally good at them and some work hard, study and practice these techniques to become great communicators.  Every person is different and the amount of spoons needed for a given activity may vary from one person to another.

If you were applying spoon theory to a party, for example, a neurotypical person might use a spoon getting ready for the party and a spoon for transport. The party itself may not consume any spoons if they're very much a "party-animal" in their element.

An autistic person however, might use more than one spoon to locate and dress in suitable attire, they might lose a spoon to nervousness and to transport - but then they may lose several at the party as they get caught up in various interactions.

If there's a sudden change - autistic people generally don't react well to change - this too will consume a spoon. It's not hard to see that the autistic person is far more likely to run out of spoons and have to end the social activity early.

Interestingly, "playing with the dog" at a party often doesn't use a spoon -- and that's sometimes where you'll find the autistic people when they're out of spoons and are trying to recharge.

There are no absolutes in spoon theory. You can't measure spoons and know for certain how many will be needed. As events change or conflicts arise, more spoons might be needed. The best you can do is "guestimate" which of the activities are most likely to drain all of your spoons and decline attendance on the worst of the non-mandatory events.