December 21, 2008
A Quick Thank-You
In all probability, this will be my last post before Christmas, possibly the last for the year so before I start, I'd just like to thank all of my readers and especially the people who left comments. Those comments helped steer this blog in different - and sometimes quite unexpected directions. Your input was greatly appreciated and has ensured that this years journey has been an interesting and relevant one.

The Christmas Pressures
There's a lot to be said for the social pressures of Christmas and in my family this has been a particular problem over the years. There is always a power struggle with my mother-in-law who feels that Christmas lunch is her exclusive domain. Even when, after years of struggling I gave up trying to share (every second year) and moved my immediate family permanently to boxing day, the pressure didn't cease - and this year is no exception.

The pressure may be coming from outside but I've noticed that over the years my wife and I are "short" with each other for most of December. That "outside" pressure certainly rubs off on the "inside" of our marriage.

This is an important point for me because I've noticed that although aspies are said to lack empathy, we're obviously not immune to this kind of pressure. The other thing that I've noticed is that we are sometimes emotional parrots. If someone smiles at us or is nice to us we tend to be nice to others around us. The same is true in reverse.

If you find yourself disagreeing a lot with your partner, it's worthwhile stopping to think about any external pressures which may be exerting themselves on the relationship or any negative feelings which you or they may be subconsciously reciprocating.

Those Overwhelming Christmas Social Events
The lead up to Christmas, and of course, the event itself is full of social events. Christmas parties, visiting relatives, long phone calls and worst of all, unexpected guests.

All of this can take a toll on the aspie who needs time to recharge his social batteries. This is especially true for children who suddenly have to share their bedrooms or even have to give up their beds for other guests.

An aspie who is feeling overwhelmed by social pressures needs to go somewhere "familiar" and private in order to calm down. For many aspies, this is probably their bedroom. As a parent, if your aspie is prone to meltdowns, you need to ensure that he has somewhere relatively isolated that he can retreat to if things seem to be overwhelming him. If you're staying away from home, it's a good idea to introduce him to the "quiet spot" as early as possible.

Christmas Foods
Christmas is full of snacky sugary foods which will tend to negatively affect concentration and sleep. If your aspie child is already quite talkative or otherwise worked up about his special interests, prepare for a major onslaught fueled by these foods and by any new gifts which may occur.

If your child's temperament is particularly affected by these sorts of foods, avoid them or keep a close eye on the levels of consumption.

Christmas Perception
The final thing I want to do is to end on a lighthearted note;

Here are a couple of perception things which I or other aspies (or children with learning difficulties) have said/experienced about Christmas;

An Article
Finally; there's an article from 2005 on Aspergers at Christmas time which you may want to read here. It's been reprinted quite a bit but it's still very relevant;

Thank you all for reading and participating through 2008. Have a safe and happy Christmas and I look forward to communicating with you in 2009. 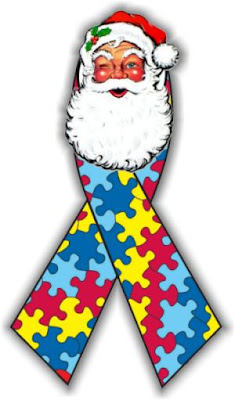 maggi said…
thank you so much for your blog, it has been massively helpful to me and my son this year (I'm NT, he's aspie). Hope you have a calm and happy Christmas break.
December 21, 2008 at 8:40 PM

Gavin Bollard said…
The long list was offensive to NTs because it made me look like a greedy, spoiled child when in reality, I was simply over-eanestly trying to please my parents by doing exactly what they asked. I'd have "liked" almost anything that Santa got me that was in the catalog.
December 22, 2008 at 8:49 AM

Khelben said…
I have an tendency to often come back to this blog Gavin and I find that it's often written with great quality.

The Rambling Taoist said…
This is one of the great bonuses of being a childless couple -- few, if any, of the outside pressures you've written about here are concerns for me. In addition, being geographically isolated from my and my wife's family, helps too.

As a Taoist, I don't celebrate Christmas. It's just another day on the calendar -- Thursday. There is no one to pressure me to treat it otherwise.

Adi said…
Gavin, thanks for your blog, it is fantastic. Thank you for taking the time to write your experiences up, it is really valuable. I refer parents and adult aspies to it as one of the top reference sites: you really get things spot on and your articles are so clear and well formulated. I hope you and your family have a joyful Christmas and all the best for the coming year.
December 24, 2008 at 5:37 AM

Kara said…
Ugh, Holiday socializing. I can deal with people I am used to being around the rest of the year: family, close friends. It is when people insist on bringing their particular friends to meet everyone else that I have no idea what to do.

Kara said…
Well, my partner corrected me and said it is not one of the AS sites she told me about. I'll add your feed tonight though.
December 24, 2008 at 7:53 AM

I've enjoyed reading your blog and exchanging comments with you these past few months. I return often, just to see what's up.

You're an excellent writer. I think you're doing a great service for this community of interested readers.