Book Review: Raising a Left-Brain Child in a Right-Brain World

October 11, 2009
I'd always intended to do some book reviews on "Life with Aspergers" and since I was sent the following book to review, it seems a good place to start.
Raising a Left-Brain Child in a Right-Brain World
Strategies for Helping Bright, Quirky, Socially Awkward Children to Thrive at Home and at School.
by Katharine Beals PhD. 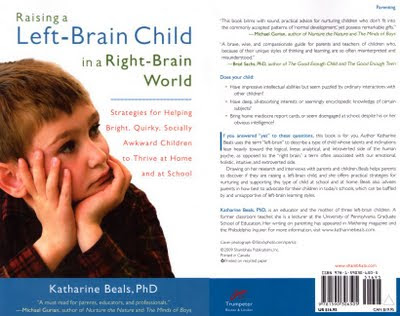 Initial Response
On the face of it, the title of this book would probably not engage my interest - which is unfortunate because it's a really fascinating book. The title isn't wrong either, the book really is about "Left-Brained Children"; it's just that you need a bit more explanation before you read the title.
The Left Brained Child
Katharine Beals has used the label "Left-Brained" in place of other more judgemental labels. She describes the left brained child as the sort of child to whom mathematics comes easy and group work does not. Her definition is quite encompassing but if I have any issues with the book, they're simply that the definition she uses isn't wide enough. In my opinion, the book is just as relevant to children with "left brained" characteristics but better English/History skills than mathematics. Similarly, much of the book is relevant to children who have aspergers but who also have learning difficulties which prevent them from becoming "math wizzes".
What is the Book About?
The book describes three types of "left-brained" children;
There are similarities between all three types of children and you may find, as I did, that things relevant to your child appear in all three sections.
What makes this book fascinating is that instead of providing an overall view of the child like most similar books, it concentrates on the changing school environment and its effects on these children.
It helps that Katharine is both an educator and a mother because her discussions don't stop at the school, they also include socialisation with school children outside of school (playdates), homework and learning at home.
The Changing School
It's strange but I had actually noticed many of the school changes that Katharine talks about. It's just that I'd never considered them together and I hadn't really given much thought as to how they were affecting my children. After reading this book, I've got a lot of questions that I want to ask at our next school meeting - and quite a few changes I'll be suggesting at our next IEP.
The book covers the effects of some radical and "right-brained" changes to the school curriculum many of which have probably already been implemented at your children's schools without your knowledge.
These include reform math, which places greater emphasis on creative and group solutions to problems than on mathematics itself. Examples include exercises such as "measuring the playground" and questions such as "What is your favourite number and why?".
The book covers changes to several other disciplines, including science, writing, foreign language and literature. These changes are all quite frightening and I've recognised a few of the projects cited as things my own children have brought home.
Readability and Practicality
Textbooks are not novels, we don't read them simply for enjoyment. We want to be able to get something out of them. To do this, they need to offer real life examples and good advice.
Interspersed throughout "Raising a Left-Brain Child in a Right-Brain World", are snapshots of our children's world. Some are through the eyes of these children but most are from a parent's point of view. These are offered, usually at the beginnings of chapters, without any initial interpretation. The interpretation is provided when the incidents are referred to in later parts of the chapter. I really liked this approach. It gave me an opportunity to formulate my own ideas as a parent before explaining the real situation. In many ways, this is exactly the "gap" that parents experience between what they see and what their children feel.
Even better, each section concludes with a number of detailed suggestions for working around the problem. They range from the obvious and drastic; "change schools" including what to look for in a new school, to suggestions for inclusion in the IEP, extracurricular activities and even ways of dealing with your child's lecturing or argumentive streaks at home and with friends.
This book was really very interesting and relevant and I urge you to look beyond the title. If you have children, particularly in the early years of primary/elementary school, then this book may be essential reading.
You can read through Katharine Beals' introduction on Amazon. This will give you a better feel for her criteria for "left-brained children.

Rachel said…
Measuring the playground? What is your favorite number, and why? Oy. Is this what's been happening to education? I am SO glad I homeschooled.

I have a visceral physical reaction to these kinds of activities; they make me want to curl up with a good book and be left the hell alone. When I was a little Aspie, how could I possibly have measured a playground with all those other children running amock? It would have been chaos. And maybe people can have favorite numbers, I don't know; I would have said that mine was zero so they'd take me out of class for being uncooperative.

I feel very lucky that I grew up in a conservative school in which the teachers didn't try to make learning fun. They knew that learning *is* fun, and they communicated it to us by their love of the subject matter and by the importance they assigned to it.

There's something amiss when everything has to be fun. It gives kids a false perspective on the world. Yes, some things are fun, but the real question is "Does it give you joy?" Some things that are not fun can be a joy to do. Just ask any parent.
October 12, 2009 at 6:39 AM

aspieteach said…
Gavin, as a parent how do you feel about the new math curriculum? And do you happen to know which one is being used? I'm curious because most teachers have a very hard time implementing it properly.
October 14, 2009 at 4:37 AM

Gavin Bollard said…
I'm a little irritated at the fact that I wasn't aware of the changed curriculum.

It's only that I recognised several examples from the book as work my son has brought home that twigged me onto the idea that his school was following the new curriculum.

It's certain that the changes make the school less aspie-friendly. My eldest son isn't particularly academic so, I'll probably leave things as they are for a while but of course, in the meantime, he has a tutor.

It's a sad fact that 2 hours per week with his tutor teaches him more academic material than an entire week with his class.
October 14, 2009 at 8:55 AM