Article: A New Novel "600 hours of Edward" by Craig Lancaster

November 02, 2009
It seems only a few years ago that the word "Aspergers" was virtually unknown outside of universities, schools and special education classrooms.
These days though, we seem to have aspie characters on primetime TV and in movies. In fact, recently we've started to see a movies like "Adam" and "Mary and Max" which are completely centred around their aspie characters. 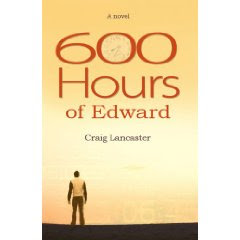 I'm pleased to announce that Craig Lancaster's new novel "600 hours of Edward", released today is another such work and one that I'm particularly looking forward to because after all, there's only so much you can do in a film or TV series. Novels can get right inside the character's head.
Craig has released an article on the development of his aspie character, Edward along with an excerpt from his book.
The web site states that everyone who leaves a comment before November 6, 2009 will go into the draw to win a copy of the book, so please visit the site, read and comment.
600 Hours of Edward
by Craig Lancaster
Riverbend Publishing
http://www.forthesakeofjoy.com/600-hours-of-edward/
oh and btw, you can also obtain and preview the book at Amazon.