November 29, 2009
I've just finished reading the novel "600 hours of Edward" by Craig Lancaster. I loved it. It was unexpectedly good (because normally I read in a different genre). It was really engaging and very difficult to put down. My only complaint is that there weren't 700 or 800 hours. I was
enjoying it so much that I was sad when it ended.
Craig... I think we need a sequel. 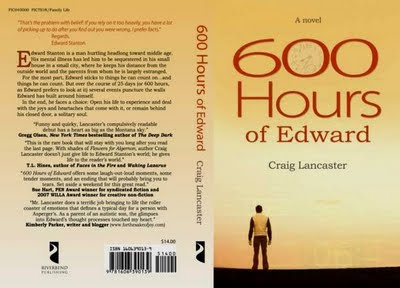 600 Hours of Edward features an Aspie protagonist (Edward). It's the first novel I've read which does so. At first, I wasn't sure exactly how well I'd be able to identify with Edward. After all, he's a fiercely OCD aspie with a fixation on weather and Dragnet. His social issues are also so severe that he's generally unemployable. Since I've never been unemployed, I didn't think that I'd relate all that well.
I was surprised. It's true that in the beginning, I didn't identify with him much at all but as I got further and further into his character, I found myself identifying more and more with him.
To be frank, although the book is about a series of events, it's the character study that is most fascinating. I've seen it compared to "Flowers for Algernon" and in some way, this makes sense since Edward does manage to "grow" as a person. In many ways though, the message it presents is better than "flowers". Edward might grow but he doesn't really change. Acceptance is a better word than change - and more appropriate to aspies of today. The acceptance isn't once-sided either. Everyone needs to grow and adapt.
This book gives you a chance to climb inside the mind of an aspie. Edward's innermost thoughts and motivations are revealed to us. It's funny because I could find myself identifying with many of his motivations. The date scene is particularly funny and I can remember thinking similar things myself on dates. The pull of routine and the need to provide "too much information" is overwhelming at times.
The book is somewhat repetitive, starting almost every chapter with the same phrases. This may be a little annoying for some people but it pulls us firmly into Edward's world. His world is repetitive because OCD and Aspergers are repetitive conditions which require strict routines.
He likes routine and he knows when his routine is disrupted. It causes him great anguish.
I was reading about Edward's OCD issues, particularly his noting down the weather and his waking times. I thought about how time-consuming that particular ritual is and I thought to myself, "Gee, I'm glad that, I don't have those sorts of rituals"...
Then, at some point while reading the book, I went out a bought a DVD and found myself compelled to update it in my catalogue. The need to do so itched at me until I scratched it.
I am exactly like Edward.
His comments on watching Dragnet at exactly 10pm didn't gell with me either. I'm particular about watching Doctor Who but I'm not fixated on times. Not since I got video cassettes. Of course, before the advent of video, I can remember pitching hissy fits or not talking to my parents for a week if they caused me to miss an episode.
Edwards "letter therapy" is also quite interesting. I've always been a bit of a letter writer myself and I must agree, it really does help you to cope with the frustrations of everyday life. It's part of the reason why I, and many other people blog about things that are happening in our day-to-day lives.
600 hours of Edward is an absolutely fascinating book. If you're an aspie, you'll see yourself in it. If you're married to an aspie or if you're caring for one, you'll get a fascinating glimpse of their thought processes.
It's truly recommended reading.
Links
600 Hours of Edward is available on Amazon.
There's a post from Author: Craig Lancaster about writing the character here.
There's another good review here.
This copy was sent to me by Riverbend Publishing for review.

The Sesquipedalian said…
Thanks for the review! This book is definitely going on my "To Read" list.
December 2, 2009 at 8:28 AM

Rafael Pozos said…
I might try reading it. It may be too painful for me as I am an aspie and have suffered a lot of what has been described here.
December 2, 2009 at 5:32 PM

ASFA IRC said…
Our book club read it and loved it. I have worked with a young lady in high school who was my library aide and later volunteered for me and even substituted for me in the library. We have had a ten year relationship as teacher, employer and friend. She is an inspiration.
April 4, 2015 at 10:48 AM